Aroland First Nation is an Anishnawbe First Nation located 60 km north of Geraldton and 20 km west of Nakina on Hwy 643 in Northern Ontario, Canada.
Aroland First Nation is an organization which is dedicated to delivering and creating education, health, cultural, and economic opportunities for its members and conserving its traditional territory. Aroland has a strong connection to the land and has been a steward of the land since time immemorial. 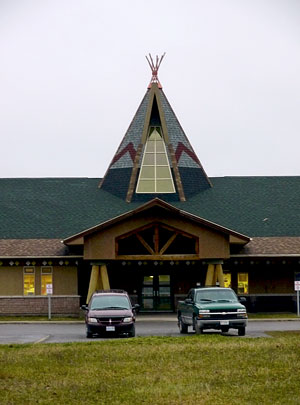 Aroland First Nation gained reserve status under the Indian Act on April 15, 1985. Reserve lands have recently been dedicated to the First Nation by both Provincial and Federal governments. Aroland First Nation is a member of the Matawa First Nations Management and the Nishnawbe Aski Nation. Currently, Aroland has approximately 700 band members, and approximately 400 live in the community. Within the extended community, most people live in Thunder Bay; while other people live in Geraldton, Longlac, Alberta, Timmins, Toronto, Ottawa, Guelph and Nakina.

For any proponents who wish to conduct activities in our Traditional Territory including mineral exploration, forestry, aggregates, power generation and distribution or any other infrastructure development, you must contact us prior to conducting activities within our traditional territory. Please contact our Band Office for more information.

Prior to European contact, the ancestors of Aroland First Nation hunted and fished meats, as well as both cultivated and gathered vegetation from the land. Along with European settlers, however, came the imposition of external knowledge and management systems (including Forest Management Units, parks and protected areas, Wildlife Management Units, mineral claims, registered traplines, and Reserves) often without Aroland peoples’ input or consent. 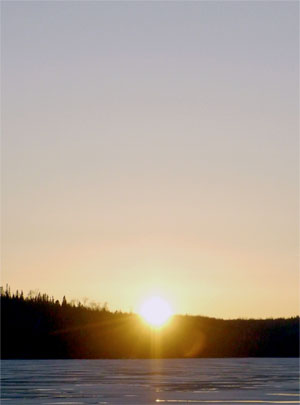 The settlement of Aroland First Nation occurred circa 1900 by community members engaged in the fur trade with the Hudson’s Bay Company. Aroland First Nation [Aroland 83 reserve] is comprised of an amalgamation of members with ties to Eabametoong, Marten Falls, Ginoogaming, Long Lake 58 and Fort William First Nations. Aroland First Nation is included in Treaty 9, an agreement established in July 1905 between the Government of Canada in the name of King Edward VII and various First Nation governments in northern Ontario. 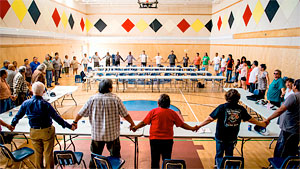 Although the settlement is not yet formally a reserve, it should be designated as such in the near future, and due to an agreement with the Crown is recognized as a reserve under the Indian Act. Following multiple negotiations, Aroland First Nation gained certain reserve status under the Indian Act on April 15, 1985. Reserve lands have recently been dedicated to the First Nation by both Provincial and Federal governments, however, a final formal designation of reserve lands is not yet in place. Current reserve lands contain 19,599 hectares (79.0 square miles) and extend northward from Highway 643 to encompass lands along the western and northern shores of Esnagami Lake. At present, these lands are generally undeveloped. 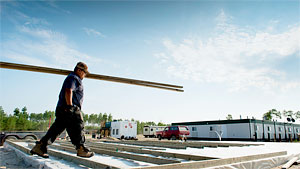 Aroland holds interests in both stewardship of its traditional lands and in fostering the social and economic well-being and resilience of its members.